Nothing beats the energy and excitement of a great live experience. That’s why our mission is to bring the very best in live entertainment to the largest possible number of people. Founded in 1992 in the UK, we’ve grown into the world’s number one live-theatre company today. We cover every discipline in the theatre industry, from operating venues to ticketing platforms and producing shows.

We own or operate some of the world’s most iconic venues.
We operate 58 venues across Britain, the US and Germany. Our impact on these venues takes significant investment, in some cities we’ve restored closed and forgotten theatres like The Colonial Theatre in Boston, the Hudson Theatre in New York and Stockton’s Globe theatre, back to their former architectural and trading glory.

Our portfolio includes historic West End theatres such as the Duke of York’s, Harold Pinter, Piccadilly, Savoy, the Apollo Victoria and the Lyceum, home to Wicked and The Lion King respectively. We also operate venues across the UK in major cities such as Birmingham, Bristol, Edinburgh, Glasgow, Liverpool, Manchester and many more. We programme, present and operate two music-focussed arenas; the historic Globe in Stockton, and the brand-new Digital Arena on the waterside in Swansea (opening in 2021).

In the US, we run two theatres on Broadway and manage venues in Brooklyn, New Orleans, San Antonio, Detroit, San Fransisco, Boston and Houston.  ATG operates the two venues presenting Harry Potter and the Cursed Child in the US: the Lyric Theatre on Broadway and the Curran Theatre in San Francisco. In Europe, we operate theatres in Berlin, Cologne, Düsseldorf and Bochum.  In addition, we’re delighted that Harry Potter and the Cursed Child has chosen one of our venues, the Mehr! Theater in Hamburg, for its first ever non-English production, which we will produce and open in 2021.

We are the world leader in theatre ticketing
We process more than 16 million tickets a year for hit musicals, acclaimed plays, concerts, comedy shows and a variety of other live events across the UK, US and Germany.

We run some of the world’s most popular theatre ticketing sites, with ATGtickets.com alone attracting over 40 million unique visitors a year.

Our complementary brands include TicketsDirekt.de, LOVEtheatre.com and Group Line which is the UK market leader for group sales and consistently voted “Best Ticketing Agency” by industry peers.

We present the world’s best live entertainment in our venues
Working alongside the world’s leading producers and creative artists, our venues present an extraordinarily diverse range of top-quality entertainment.  Our West End and Broadway theatres host long-running hit shows such as Disney’s The Lion King, Wicked and the award-wining Harry Potter and the Cursed Child. Newer shows in London include Come From Away, Pretty Woman and the forthcoming Moulin Rouge! The Musical. Star performers appearing on our stages include Jake Gyllenhaal in Sunday in The Park with George, Tom Hiddleston in Betrayal, Uma Thurman in The Parisian Woman, Ian McKellen in King Lear and soon to open Eddie Redmayne and Jessie Buckley in Cabaret. Many of these shows are created by our own in-house producers. Our regional venues in the UK and US present the top musicals including Hamilton, The Book of Mormon, Les Misérables, Mamma Mia, Jersey Boys  and in Germany shows such as Harry Potter and the Cursed Child and the long-running production of Starlight Express in Germany. Music also features with the world’s top artists appearing regularly in our venues. Recent highlights include Billie Eilish, Bob Dylan, Bruce Springstein, FKA Twigs, John Legend, Paloma Faith, Mariah Carey, Tom Jones, Stevie Wonder and Diana Ross.  The mix is completed with the very best comedy, dance, opera, and much more to delight audiences in our venues across the globe.

We produce award-winning shows
We produce shows across the entertainment spectrum and are proud to have won many Olivier and Tony awards. Recent ATG productions in the UK include the critically-acclaimed Pinter at the Pinter season, 9 to 5 the musical scored by Dolly Parton and the West End hit Pretty Woman The Musical.   Ian at Eighty celebrated Sir Ian McKellen’s 80th birthday with an 80-date UK tour and West End season in support of British theatre. On Broadway, recent productions include Sunday in the Park with George, Plaza Suite starring Sarah-Jessica Parker and David Byrne’s American Utopia. Our European production arm, Mehr-BB has produced West Side Story, The Bodyguard and Disney’s Beauty and the Beast. ATG’s partner company Sonia Friedman Productions is  the acclaimed international producer of dozens of hit shows including Harry Potter and the Cursed Child, Mean Girls, The Book of Mormon, Dreamgirls,  Jerusalem and The Ferryman.

On this site you’ll find information about working in our U.K. business, including vacancies posted by Groupline, LOVETheatre and Sonia Friedman Productions. Take a look at Our Teams to find out more, or search for current vacancies.

Roles in our U.S. business are currently advertised directly on the websites of the individual venues.

For roles with BB Group, AKA, and Mehr! Entertainment, please visit their careers pages by following the links below. 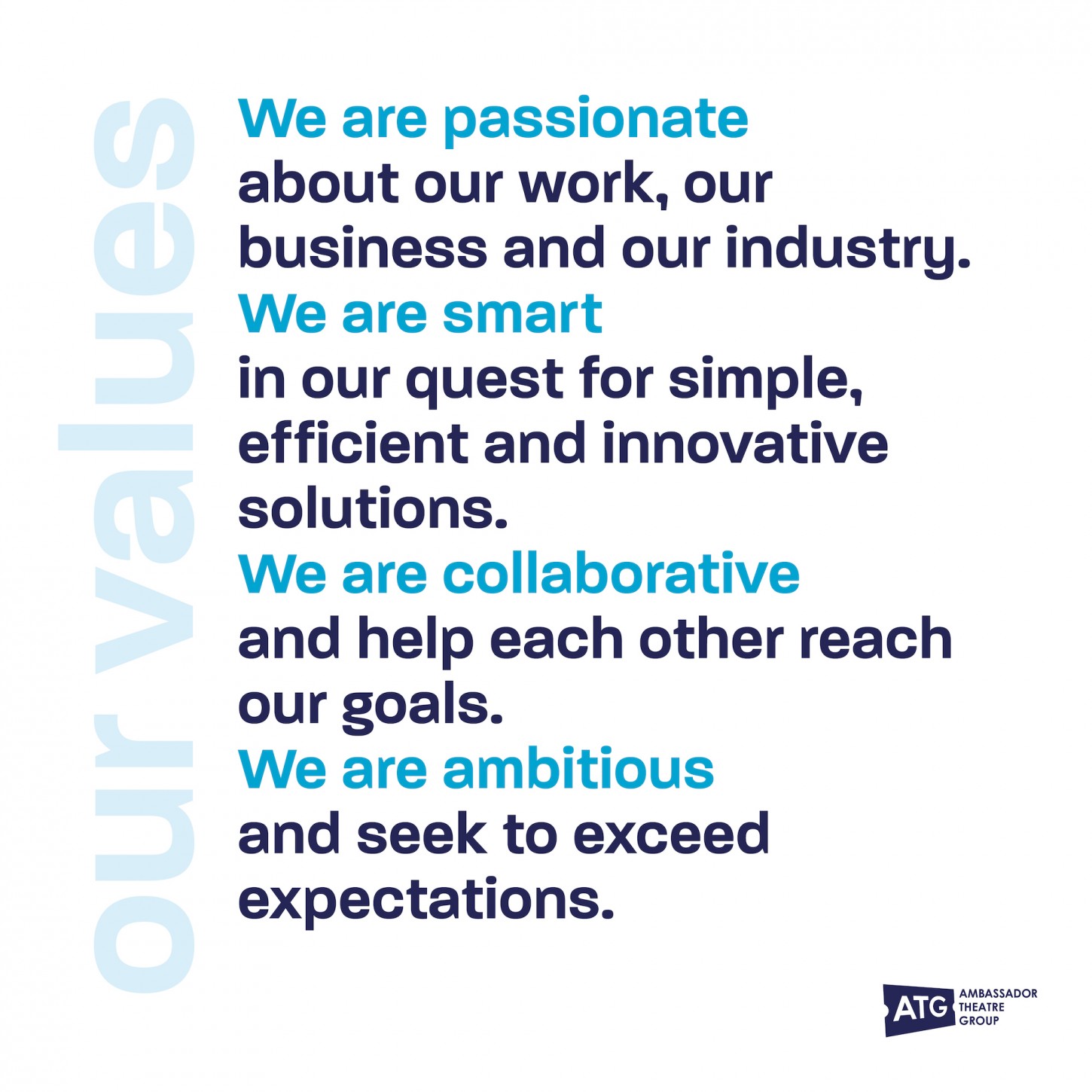